Abstract. In the last years Aedes albopictus (well known as tiger mosquito) quickly and widely diffused in the Italian territory. These insects are ideal vectors for different Arboviruses, as Dengue virus (DenV), estimated to cause in the world about 50 millions of patients per year and as Chikungunya virus (ChikV), causing millions of patients per year. The Chikungunya virus appeared for the first time in Italy in 2007, in the Provinces of Ravenna, Rimini, Forlì and Bologna, causing more than 300 human clinical cases and great alarm in the whole Italian population. This situation prompted our Institute to begin a surveillance plan for this virus and a monitoring program of the vector in the Marche region, a neighbour location near the first Italian ChikV outbreak. The aim of this plan was the reduction of the vector density and a very early individuation of human illness cases to prevent viral diffusion in this territory. For this purpose we have set up a diagnostic methodology for the rapid detection of the ChikV directly from vectors. Particularly, we have developed an end-point multiplex PCR (with an internal control for Aedes albopictus), which allows to determine the presence of the virus directly in the sampled insects (captured through the use of BG-sentinel traps), obtained during the active entomological surveillance in the Marche region.

Introduction
Aedes albopictus, better known as tiger mosquito, is a vector which, in a world based on climatic changing, demonstrated to be very suitable for its diffusion from tropical to temperate areas. A. albopictus is present also in Europe and widespread in Italy (3). These type of mosquitoes can transmit a wide variety of viruses, in particular, Chikungunya virus (ChikV). From data of the European Centre for Diseases Control (ECDC) several Member States have reported ChikV fever cases in travellers returning from affected areas, above all in South-East Asia. The Chikungunya fever, caused by this virus, is an illness mostly characterized by fever, shiver, headache, nausea, vomit and intense and prolonged articular pain (1, 2). This virus belongs to the Togaviridae Family, Genus Alphavirus. ChikV has a single stranded RNA genome (about 11.8 kb), a diameter of 40-70 nm, an icosahedral symmetry of the virus structure, with envelope. ChikV has two Open Reading Frames (ORFs), codifying for non structural proteins (nsP1, nsP2, nsP3 e nsP4) and one ORF codifying for structural proteins (C, E2, E3, E1).

Insect and nucleic acid collections
All the mosquitoes were collected with BG-Sentinel traps, in the surveillance plan of Pesaro Province in the Centre of Italy. After being identified by optical microscopy, all the mosquitoes were frozen at -80°C for the following RNA extraction. For this protocol evaluation, we used a ChikV cDNA kindly offered by Dr. Paolo Bonilauri (Istituto Zooprofilatico Sperimentale della Lombardia e dell’Emilia Romagna, Italy), coming from the 2007 Italian outbreak.

In silico studies and primer design
In the first phase we designed a new couple of primers specific for ChikV. We collected 117 sequences of the whole E1 gene, deposited in GenBank, aligned them with the software BioEdit (v.7.0.5.3) and obtained a consensus sequence, used for primer design with the software Primer3 (http://frodo.wi.mit.edu/cgi-bin/primer3_www.cgi). In the second phase we setup a multiplex PCR protocol amplifying at the same time a sequence of the E1 gene of ChikV and one of the gene rpL17 of A. albopictus (4).

RNA extraction
RNA extraction was carried out from 50 pooled insects, after homogenization in 5 mL of PBS 1X sterile solution (NaCl 137 mM, KCl 0.27 mM, Na2HPO4 0.81 mM, KH2PO4 0.19 mM). After centrifugation at 1000 rpm for 10 minutes, we collected 200 µl of the supernatant and extracted the RNA with a classical Trizol (Invitrogen) protocol. Qualitative and quantitative yields were evaluated with a BioPhotometer 6131 (Eppendorf).

Retrotranscription (RT) and amplification (PCR)
RT was carried out in a volume of 20 µL with the following components (final concentrations): Buffer SuperScript II (Invitrogen) (1X), dNTPs (0.5 mM), DTT SuperScript II (Invitrogen) (10 mM), RNasin Ribonuclease Inhibitor (Promega) (20 U), random hexamers (2.5 µM), RT SuperScript II (Invitrogen) (100 U) and 5 µL of extracted RNA. RT protocol had the following temperatures: 20°C for 10 min, 42°C for 60 sec, 95°C for 10 min. After the optimization, the multiplex PCR reaction was carried out in a total volume of 25 µL with the following components (final concentrations): Buffer GoTaq Flexi (Promega) (1X), dNTPs (200 µM), primers ChikBaro1 and ChikBaro2 (0.4 µM), primers Aa_rpL17-F and Aa_rpL17-R (0.2 µM), GoTaq Flexi (Promega) (1 U) and 5 µL of cDNA (1 for ChikV and 4 for A. albopictus). The amplification protocol had a first step of denaturation at 92°C for 2 min, followed by 35 cycles at 92°C for 20 sec, 56°C for 20 sec, 72°C for 30 sec and a final extension at 72°C for 4 min. All RT and PCR reactions were carried out using a thermalcycler ep-Gradient S (Eppendorf). PCR products were run on a 2% agarose gel and visualized with a GelDoc2000 apparatus (Bio-Rad), through ethidium bromide staining. The molecular marker used was a 100 bp DNA ladder (New England Biolabs).

Results & Conclusions
The primer design output of Primer3 was: ChikBaro1 (5’-TCC gAA TCA TgC AAA ACA gA-3’) and ChiKBaro2 (5’-AAg CCA gAT ggT gCC TgA-3’). These primers amplify a 389 bp fragment of the E1 gene of ChikV. We have then multiplexed the previous designed primers with Aa_rpL17-F (5’-TCA ATC CgT ACA TgT CgT Cg-3’) and Aa_rpL17-R (5’-gCT ggA gCT TCT TCT Tgg AC -3’), from Arcà et al., 2007 (4). These last primers amplify a 123 bp fragment of the rpL17 gene (Accession number AY826144), codifying for the ribosomal protein L17 of A. albopictus. This multiplex PCR has been also optimized, through a temperature gradient (50-60°C), to confirm the best annealing temperature to use in the protocol, and testing different combinations of MgCl2 concentrations and primers, to guarantee a better result in amplifying cDNA of ChikV compared to A. albopictus DNA (Fig. 1). 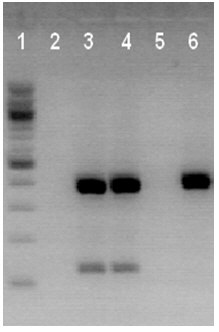 
With this work we have setup a new diagnostic method for the research of Chikungunya virus directly from Aedes albopictus pooled samples. The primer design carried out on the sequence of E1 gene of ChikV has permitted to create new primers, which can be used together with Aa_rpL17-F and Aa_rpL17-R oligos for the simultaneous identification of the virus and the mosquito. The amplification of this last gene (rpL17) demonstrates the correct execution of the upstream processes of PCR, so it can be considered as an internal control. This is strengthened from the difficulty of finding infected mosquitoes to use as positive controls. This PCR protocol could represent an important instrument for the surveillance of ChikV diffusion or in case of epidemic for estimating and monitoring the outbreak. The only one strategy of limiting the eventual transmission of this virus is to settle control measures of the vector and the knowledge of viral diffusion. Moreover, this biomolecular technique, for its high sensitivity and its short protocol, offers advantages compared to viral isolation. In case of epidemic this diagnostic method could have a predictive significance, because, apart from assessing the nature of suspect, can measure both the diffusion and the infection risk for human health.